An independent report from an experienced charity practitioner commissioned by GETA in April 2019 noted that St Theresa’s is a successful school with leavers’ examination results increasing each year, making it the most popular school in the diocese, and consequently heavily oversubscribed. It also emphasised the benefits our financial support has brought to the school community and concluded:

“...I was impressed by what I saw and would recommend you continue with your support.”

In addition to contributing to many of the regular expenses of the school, GETA has funded several major projects including:

(1) the construction and furnishing of school buildings (2) the drilling and installation of a water bore-hole and pumping equipment, and a storage tank (3) the installation of a security fence around the school compound to address safeguarding issues (4) an additional 10,000 Litre water storage tank to cater for the increasing roll of this highly successful school.

The girls already have their own dormitory, so the school’s current priority is the construction of an 80 bed boys’ dormitory block for weekly boarders. Independent assessments commissioned by GETA have confirmed the viability and value-for-money of the proposal.

GETA has already funded Phase One – site clearance, construction of foundations and laying of the concrete base, and Phase Two - the construction of the block itself has been started; these have cost £6,000. Future donations would allow us to fund the remaining cost of Phase 2 – the roof and exterior rendering and interior plastering, and the furnishing of the facility with not only basic furniture, but also those additional touches which would make this not only a “dormitory” but the boys’ new home whilst boarding during the week.

Funding is vital to keep this school active. Currently we are reliant on the small fundraising efforts of our team. Would you consider us as your chosen charity for any fun runs, company charity days, regular standing order or even a one-off donation. This would make a significant difference to the lives of the children who ordinarily may not receive an education. 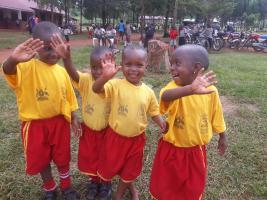